Mahendra Tappoo was born in Fiji and is the Executive Director and one of the seven Board of Directors of the Tappoo Group of Companies which is a leading and a respected multi-faceted business group in Fiji.

A Law graduate from University of Auckland and a music lover and singer, Mahendra was the first artist from Fiji to professionally record and release music albums in India with professional musicians. Mahendra Tappoo has served as a Board member of the then Fiji Visitors Bureau.

His philanthropic efforts have contributed towards helping various charitable organisations and needy causes.

He served as a Trustee of the Sri Sathya Sai Service Organisation in Fiji. In the 1990’s he spearheaded the Unity of Faiths community service project which was commended by the then Prime Minister and Government of Fiji.

As Chairman and Founding Trustee of the Sai Prema Foundation Fiji, he spearheads a noble mission to serve the poor and underprivileged in Fiji through medicare, sociocare and educare initiatives.

Maya Tappoo was born in Fiji and is a gifted Hindi language public speaker and has delivered various talks on spirituality in Hindi. She has also worked for 9 years as a Radio presenter for a leading and popular 24-hour Hindi radio station in Fiji.

For over three decades, Maya has been involved in philanthropic work hav­ing been a part of various charitable and social institutions serving the poor and needy of Fiji. She has spent her time identifying poor and needy indi­viduals and families, serving them and helping them in whatever way that she can.

Over the past two decades, she was involved with the Sathya Sai Service Organisation’s human values classes, community service initiatives and Spiritual Centre of the Organisation in the nation’s capital, Suva.

As the Founding Trustee of the Sai Prema Foundation Fiji, she is part of an unprecedented mission to serve the poor and underprivileged through medicare, sociocare and educare initiatives. 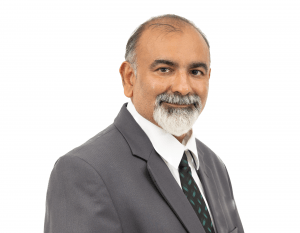 Rajendra has served in various Executive Finance positions with major Corporate bodies in Fiji including Colonial Group, FMF Group, Carpenters Shipping having commenced his career with Price Waterhouse. He also tutored in Accounting and Auditing with USP and College of Higher Education Studies. His professional memberships include CA membership of the Fiji Institute of Accountants since 1992.

While he is currently a board member with the Frank Hilton Organisation, he has held various positions of President, Vice President and Treasurer. He is also the Treasurer with ABC Foundation (Action For Betterment of the Community) since 2002.

Rajendra has taken an active role in coordinating a combined relief effort bringing together a number of Charitable Organisations focused on providing effective and timely assistance to those affected during disasters faced by the Nation. He involves himself in regular medical camps in areas with limited access to medical facilities, regular food parcel distribution to those in need, regular food preparation and distribution to orphanages, homes caring for children with disabilities and old aged homes, and nation building activities.

He has served as the National Service Convener and National Treasurer with Sri Sathya Sai Service Organisation of Fiji from 1996 to 1999 and has now been appointed as Trustee of Sai Prema Foundation Fiji to accelerate the mission serving the underprivilged and needy people of Fiji.

Kamlesh Tappoo was born in Fiji and is an Executive Director and a Board member of the Tappoo Group of Companies which is a leading and a respected multi-faceted business group in Fiji.

A Commerce graduate from the University of Auckland, he worked with Coopers & Lybrand, Chartered Accountants, in New Zealand and in Australia for over 3 years before joining his family business.

His philanthropic efforts have contributed towards helping various charitable organisations and needy causes. Kamlesh has been deeply inspired by the humanitarian works of Sri Sathya Sai Baba to help the poor and needy, irrespective of race, religion or creed. He has served the Sathya Sai Service Organisation Fiji in various capacities for over two decades since the 1990’. He has been the Co-Founder, since early 2000’s, of the ABC Foundation, a Foundation registered for purposes of “Action for Betterment of the Community”.

As a Trustee of the Sai Prema Foundation Fiji, Kamlesh Tappoo considers it his noble duty to serve the poor, needy and vulnerable in Fiji through medicare, sociocare and educare initiatives.